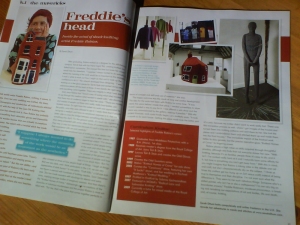 Knit.1 magazine commissi0ned me to write a profile of textile artist Freddie Robins – the blackly witty creator of impossible jumpers, absurdist knitted sculpture, and the magnificent series Knitted Homes Of Crime, which reproduces in cuddly yarn the homes of notorious female killers. But as well as being astonishingly talented, it turns out that Robins is a thoughtful and generous interview, making time to chat with me even though she was in the middle of moving studios.

The finished feature is in the issue that goes on sale 5 May – and if I wasn’t pleased enough with the piece itself, the layout is smashing, and it’s keeping company with some really lovely patterns (I’m especially taken with the lace top they’re highlighting on the magazine homepage).

I used a shortened version of this quote in the feature, but found it so heartening I think it’s worth giving in full and maybe getting tattooed on my forearm:

It can take people a very long time to achieve what they want to achieve and I think I was like that, I was a very slow burner. I graduated 20 years ago and I wasn’t quite doing what I wanted to do until 14 years after I graduated. I do think that part of my success is determination and staying power – people give up because it’s really difficult and they want other stuff more than they want to do that kind of work, and I haven’t given up. Other people give up and go away, and you’re just left saying, ‘ok, I’m the top of the ladder now.’ There’s so much to be said for determination and staying power, in many ways more than skill or talent.

One thought on “Freddie’s head”