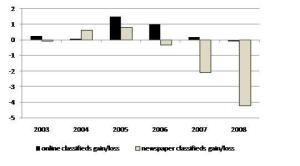 Graphs taken from The Media Business

Newspapers might be having trouble retaining their classified advertising, but Robert G Pickard on The Media Business blog reckons that’s not solely down to internet competition, and nor is it certainly fatal. He offers two graphs (above, using data from Newspaper Association of America and the Internet Advertising Bureau) to prove his point:

The Internet certainly is taking some money from newspapers, but it isn’t the worst culprit. The real competitor is direct mail and home delivery advertising that have taken much preprint and display advertising from newspapers in recent decades by delivering better household reach. That was compounded by the significant reduction in the number of large retailers in the late 1990s and 2000s. The development of the recession in 2007 and 2008 is currently playing a major role because newspaper advertising—especially classifieds—is more strongly affected by recessions than other types of advertising. But recessions come and go and there is no reason to believe that an advertising recovery will not accompany an improvement in the economy. […]

The end for newspapers is not in sight and those who think that the $50 billion industry is going to collapse and disappear within a year or two because of Internet advertising are just not paying attention close enough attention to what is really happening across media industries.

Measuring the market value isn’t an especially good way to judge the effect of online competition on print ad spending: an online listing is cheaper than one in a newspaper, so every customer who deserts print for the internet will only take a small portion of their advertising spend with them. And while Pickard is correct when he says it’s not just the internet squeezing advertising away from print, it still seems to take a mighty squint to get these figures looking good for newspapers.

Classified advertising revenue for newspapers continues to plummet dramatically according to both graphs – whether or not that revenue is being diverted to online services, newspapers still aren’t getting it, and publications who have formerly relied on their small ads can’t depend on getting them back when the recession is through.