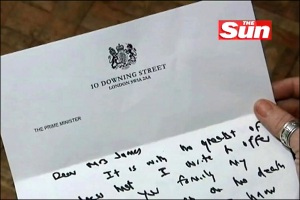 The PCC code warns that “In cases involving personal grief or shock, enquiries and approaches must be made with sympathy and discretion and publication handled sensitively.” But in some cases, the distressed and bereaved will have reasons for actively welcoming publicity – and Jacqui Janes appears to be one such case. The mother of a guardsman killed on duty in Afghanistan, she is grieving and angry over her son’s death, and those feelings have been compounded by what she feels to be the offensively illiterate way in which Gordon Brown wrote to express his condolences.

Up until this, I didn’t know that Brown was handwriting letters to the families of fallen soldiers. And personally –despite many misgivings I have about the way the government has managed the war in Afghanistan – this makes me think better of Brown. He appears to experience his responsibility to bereaved families deeply. But I understand why Ms Janes would feel differently on receiving what she considers a deeply inadequate letter.

What I don’t understand is how Dominic Mohan can justify making a spectacle of one family’s grief. Loss of a child is a dreadful, crushing thing – and however cathartic it might be to attack the government responsible for that death, grieving in public can be a cruel process. In the worst cases, people can become fixed as professional mourners, and the process of recovery is made horribly protracted. That’s why the PCC’s guidelines on intrusion into shock and grief are there, and every publicity approach from a bereaved family ought to be handled with huge tact and discretion. It doesn’t work like that, but it should.

It seems unpleasantly likely that The Sun has consciously recruited the Janes to the paper’s anti-Brown cause at a time when the family is deeply distressed. Publicising the reaction to the letter is one thing; encouraging Ms Janes to act the reporter and challenge Brown when he rang to apologise is something else. I hope that the Janes family do not feel exploited. But watching The Sun rack up the politicised covers, making a shattered family the front for its partisan campaign, it looks like something awfully close to exploitation.

14 thoughts on “Getting the ok to intrude”