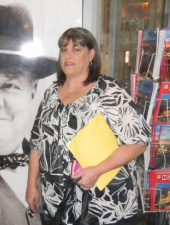 Barbara Harris (right), the founder of Project Prevention, is the definition of a social entrepreneur. She’s the kind of person who, under the Big Society ideology of the Conservatives, might be represented as a worthy provider of a public service.

She saw a social problem where she lived in LA, and she – with the time, money and inclination to do it – implemented her own solution. She even uses the language of entrepreneurship to describe the poor and desperate people she works with: they’re her “paid clients”.

And now, she’s bringing that solution to the UK, campaigning from the This Morning Sofa and the BBC’s Hard Talk.

The problem she identified is the birth of babies to drug-addicted parents. And the solution? Paying addicts to be sterilised.

Before her current UK tour, Harris claimed to have received 400 requests for her services and a $20,000 donation. That’s enough to pay about 65 women to get sterilised at the standard rate of $300 a time.

While Project Prevention doesn’t exclusively offer sterilisation – long-term, reversible contraceptive methods such as the coil, implants and injections are also supported – more than a third of her “clients” do take the tubal ligation option, according to Project Prevention’s own statistics.

In interviews Harris fequently describes herself as offering sterilisation. It’s fair to say that sterilisation is presented as the first choice for drug-addicted women. (And the “clients” mostly are women – fewer than 50 of Project Prevention’s “paid clients” had a vasectomy, which means that fewer that 2% of them are men.)

There are some pretty obvious ethical issues in offering drug addicts money for medical procedures. Harris has said (in an interview for Radio 4’s Taking A Stand) that that “in most cases” the money Project Prevention hands out goes to pay for more drugs.

Ultimately, Project Prevention’s money could be used to subsidise the drugs trade, supporting dealers and helping to create new addicts.

But Harris’ interest isn’t in the long-term outcomes for the women she works with or the areas they live in. There’s no subsequent monitoring programme and no requirement that addicts sign up for treatment – Project Prevention’s involvement with these women begins and ends with their fertility.

If they should later regret their sterilisation, Harris says “that’s no worse than if they got AIDS prostituting”, putting Project Prevention on the same level of responsibility as a virus.

At the bottom of this, Harris is responding to a genuine problem, even if she does exaggerate its severity. Babies born to drug-addicted mothers have a bad start of it.

If the pregnancy comes to term (drug or alcohol abuse both increase the risk of miscarriage), it’s more likely to result in a premature or early birth, low birth weight, infant mortality and other health problems. And then there are the social costs: children of the addicted are more likely to grow up in impoverished or disrupted conditions, and more likely to end up in care. It’s fair to say that drug addiction isn’t a great foundation for family.

Dr Petra Boynton, agony aunt and sex educator, acknowledges this, but says that Project Prevention’s approach isn’t the answer either: ”

Aside from their work being based on ideology rather than evidence (they’ve not published any research on the effectiveness of their approach for example), there is the issue of existing UK services.

We have got overstretched reproductive health services, but generally they are good and are currently seeking to improve their work. It seems odd that an organisation from outside the UK wants to parachute in and start their own approach which may run counter to what’s being attempted here.

After all, all the options offered by Project Prevention are available for free in the UK through the NHS. A better way for Harris to help addicts access contraception would be to help drug services and sex educators to work together – but then, that would take a much more sympathetic approach than Harris seems able to offer.

Harris says that she’s happy to accept donations from far right organisations, so long as the money can help her cause. Distasteful as that all might be, it isn’t the reason we should reject what she’s offering: Project Prevention should be turned back at the border because what it’s offering is short-sighted, liable to exacerbate the problem it’s supposed to solve, and most of all, it just isn’t needed.

2 thoughts on “Does paying drug addicts to be sterilised work?”