In all the expansive, improbable interior of the TARDIS, there’s one thing it definitely doesn’t have: a careers advice bureau. Lack of appropriate guidance is the only way to explain Amy Pond’s post-TARDIS trajectory, from being the kind of all-action girl who can outsmart deadly robots single-handed for 36 years, rig up a homebrew sonic screwdriver and reinvent herself as a sci-fi samurai (all in The Girl Who Waited), to being… a model, as revealed by the poster seen by the Doctor in last weekend’s episode, Closing Time.

Obviously, Karen Gillan is catwalk-gorgeous (she worked as a model before becoming an actress), but a career in posing really isn’t good enough for Pond, is it? She saw the wonders of space and time, and she decided that what she really wanted to do with her life was be looked at. Besides, Gillan’s exceptional loveliness has mostly been underplayed during her time in the series. She’s the everygirl. In fact, her backstory – meeting the Doctor as a child and dreaming of escape with him until the day he comes back for her – makes her an avatar for all the children at home, playing the part of companion in their own imaginations  (an increasingly important part of the audience for the eleventh Doctor). 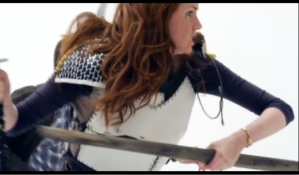 My own daughter (now five) loves Amy, in just the same way that I can remember loving Ace when I was watching in the ’80s (I even called my first dog Sophie in tribute to the actress who played her). Amy’s loyal and tough and cool, and even if Amy tends to need rescuing a bit more frequently than Rose Tyler did, you still believe that she can handle herself when she gets into trouble. Make her a model is like sneaking up behind all the admiring girl fans and whispering, “Of course… the only thing that ever really mattered was how she looked.”

It’s not the first time this series has done that to a woman character, either. When River Song regenerates in Let’s Kill Hitler, one of the first things she does is rush off to weigh herself, then come back crowing about the shape of her bottom. Alex Kingston does have a lovely bottom (for all that it’s attached to a sometimes quite annoying character), and I know River Song at this stage is supposed to be an egocentric, sociopathic nightmare – but why does the establishing characteristic of an important female character have to be body image issues?

At moments like this, I can imaging the watching nation as a whole declaring “Women! Chuh!” with a shrug of wry indulgence, as if anxious vanity was some sort of essential truth about women – and the way a woman looks was the most important metric of her value. Even a blinking baby was getting in on the objectifying act this week (or at least, that seemed to be the implication when the Doctor leaned in and answered Alfie’s burbling with a curt, “No, any babysitter, it doesn’t have to be a hot one.”)

The Doctor promised Amy the stars. Any chance that he could find a patch of space where a girl can learn that being fanciable isn’t everything?