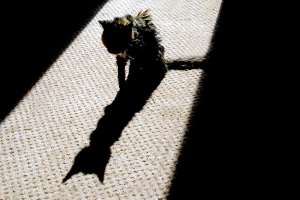 Criticising the media gets boring. Even Chris Morris – who did it better than anyone with The Day Today and Brass Eye – found that he couldn’t bear to do it anymore when he came to work out his response to the war on terror: “I did formalise some ideas,” he told the Guardian, “but the jokes were all concerned with media coverage and perception, rather than the issue itself. And when you’ve already had a crack at media language, you can only do it a few times before you know how it works.”

With Theresa May and the immaterial cat, the workings are so clankingly obvious, I feel insulted that I even have to attempt a response. Speaking to the Conservative conference, May said, “We all know the stories about the Human Rights Act… the illegal immigrant who cannot be deported because, and I am not making this up, he had a pet cat.”

As Channel 4’s FactCheck blog patiently points out, none of this is true. He wasn’t an illegal immigrant, he was a Bolivian student. And he wasn’t given leave to remain because of his cat, but because of his four-year relationship with a British national. May wasn’t making it up herself though, so at least that bit is partially true: the version of the story she tells was devised by the Daily Mail back in 2009, a bit of immigration-panic-baiting fiction improvised around one mention of the cat as part of the couple’s life together.

Can politics get shittier than the home secretary using a fabricated anecdote to undermine the Human Rights Act? Of course it can. When Ken Clarke reasonably pointed out that May was retelling a falsehood, Downing Street backed her over him. He now looks likely to lose his cabinet role. “Apparently, in party politics, once the leader has said something is so, then it is so, regardless of whether pesky reality agrees,” says Tom Chivers with righteous exasperation. 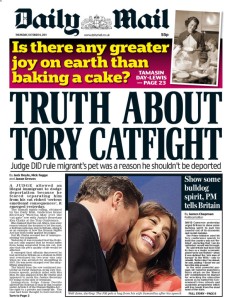 Pesky reality gets no say at all here. This is government completely dislocated from truth, policy entirely mediated by the tabloid press. The Mail invented the “You’ve got a cat, OK stay” story. May’s speech cynically picked it up again, and the paper repaid her by repeating its untruth as a front page story on Thursday (right). The story has become part of the political myth kitty, and no amount of considered debunking will declaw it: media coverage and perception has squatted in the place of the issue it was supposed to represent, wholly obliterating fact.

The Mail has pulled off a total occupation of the political system – inventing its own evidence, supporting its own politicians, and presenting itself as the voice of the electorate. That is how is works. Democracy has been tied in a bag and dumped in a river, and it’s barely even trying to fight its way out.