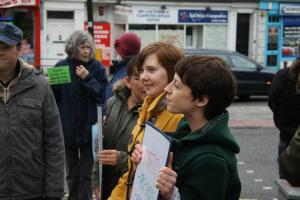 Last weekend, I took part in my first ever feminist direct action when I attended the counter-protest to the SPUC anti-abortion vigil in Bath. If you’d asked me whether I was a feminist ten years ago, you’d probably have got very strange and hesitant answer out of me: I wasn’t anti-feminist, but I wasn’t sure that I was one, either. In my early 20s, my main contact with feminism as a political movement came through university, where I was studying English literature.

On the academic side. there was the dense and chewy business of feminist literary criticism, which seemed to involve a lot of untried claims about fantastical things such as “écriture féminine” (an invention of some French feminists in the ’70s, who believed that a specifically female form of language both existed, and was endemically repressed by patriarchal culture).

Female lecturers invited me to join in their thankless hero worship of women writers like Jeanette Winterson (who, as far as I could figure out from reading Oranges Are Not The Only Fruit, was far too busy nurturing her own cult to ever do a good turn for a sister), while feminist takes on the canon seemed to reduce everyone down to their genitals.

In retrospect, I was definitely being unfair, but I had strong, self-interested reasons for wanting to avoid being tagged as a feminist critic: while English was studied mostly by girls, it was overwhelmingly taught by men. “Being important” and “being female” weren’t mutually exclusive categories, but it didn’t seem as though investing too much in the latter was going to help my claims to the former.

On the pastoral side, there was the women’s officer of the Students Union. In my time as an undergraduate, the holders of this post did two memorable things – memorable to me, at least. First, they campaigned to move the lad mags to the top shelf in the Union shop, which (thanks to the Union’s low-lying shelving) would have put FHM almost exactly at eye level.

Second, when I sent the women’s officer a slightly frantic email explaining that I was unexpectedly pregnant and trying to access support, I got a one line response: “This is a matter for the welfare officer.” At which point I was very much inclined to think, “Screw you feminism.” The first time in my life that being female had caused me any appreciable inconvenience, and the agency that was supposedly responsible for furthering my prospects decided that I wasn’t their problem.

So ten years ago, it seemed like I didn’t want feminism, and feminism didn’t want me. I knew what I owed the women’s movement historically, but I wasn’t sure that was enough to justify lifelong fealty to a cause that now seemed primarily concerned with restricting softcore. (Again, this is an unfair judgement, but in terms of media exposure, it’s much easier to find an article pitting feminists against lapdancers than one that addresses working conditions for women in all occupations. Because only one of those articles can be illustrated with a sexy picture of a sad girl with tassels on her tits.)

I had glimmers of consciousness. Sitting in a lecture theatre with my vastly male doctoral study cohort and wondering where all those bright undergraduate girls had vanished to – that was one. Seeing my supervisor’s drastic loss of interest in me when I told him I was pregnant with my second child was another. I was furious when, at my last supervison about two years later, he called me a child bride and asked pointedly whether both my children had the same father, but I suppose there was some justice in it: I’d worked furiously to be accepted on his terms, and on his terms, my uterus was a liability.

In my ten years or so in the adult world, I’ve seen the ways that prospects and ambitions narrow around gender. Through my children, I’ve been educated in the raising of boys and girls, and seen how they’re directed to different lives depending on their sex. I still have a slightly querulous relationship with feminism (or some bits of it, anyway), but I’m no longer naive enough to think that I can do without it. And of course, all along I’ve had the example of my mother’s quiet, pragmatic feminism to look to.

Reproductive rights and workplace equality used to seem like past battles in the UK, and my only duty was to enjoy the spoils. Under the coalition, I’ve realised how easily some politicians will trade women’s rights for their own gain: women’s safety, security and autonomy can easily be choked in a fug of prejudice and complacency. Not fighting for these things means seeing them slip away. Fighting for them makes me a feminist by definition – a niggly one, but unavoidably a feminist. See you at the frontline.

2 thoughts on “Why I am a feminist”