Before 10pm last Thursday night, the DUP was a shambles of a party whose leader Arlene Foster was responsible for the cash-for-ash scandal which has cost an estimated £490m and caused the collapse of power sharing in Northern Ireland. The moment the exit poll was in, it became one of the biggest forces in British politics as the prospect of the party entering into a confidence-and-supply arrangement to support a minority Tory government took hold.

And not long after that, senior politicians were making it clear that the DUP’s regressive social agenda would be staying in Stormont. Same sex marriages remain unrecognised in Northern Ireland, and the 1967 Abortion Act (which permits abortion under certain conditions in England, Scotland and Wales) still doesn’t apply there. The DUP has blocked legislative efforts at liberalisation on both counts.

Over the weekend Ruth Davidson, the Conservative’s leader in Scotland, demanded – and got – assurances from Theresa May that LGBT rights would not be up for debate. Soon after, Jeremy Corbyn gave an interview in which he declared: “LGBT rights are human rights. They must not be sold out by Theresa May and the Conservatives as they try to cling to power with the DUP.”

And as for abortion…

Well actually, as for abortion, there’s been a bellowing silence at the senior levels of politics. Corbyn’s formulation echoed Hillary Clinton’s famous formulation that “women’s right are human rights”, but there have been no specific words of assurance for the humans who are women and whose right to safe, legal abortion is routinely placed under threat at Westminster.

Read the full column at the Independent 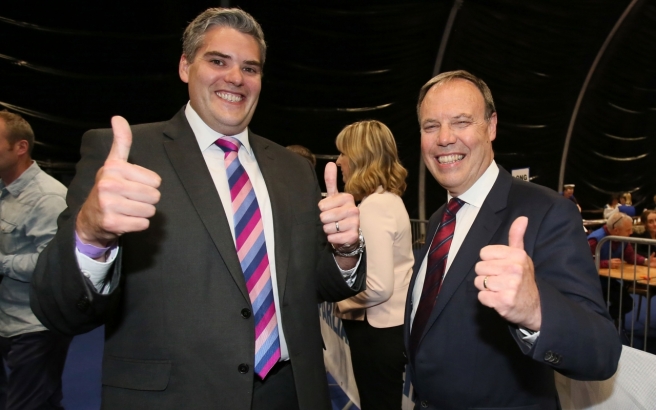 This extraordinary election has seen one horrible irony for women traded for another. At the start of the campaign, when Theresa May looked to turn her high personal ratings (lol) into an even higher Conservative majority (lololol), it seemed that the UK’s second female prime minister was going to bring about a depressing decline in female MPs: because only Labour has a substantial record of getting women into parliament (thank you, all-women shortlists), anything that hurts Labour hurts sexual equality on the benches.

Back when a 1930s style collapse seemed plausible (lololololol), names on the line included Jess Phillips and Thangam Debbonaire, among other redoubtable feminists who have brought their feminist politics into parliament. Well that didn’t happen. Instead, Labour’s surge saw Phillips add 10,000 votes to her majority; Debbonaire’s vote share went from 33.7 per cent to a dizzying 65.9 per cent.

Instead of losing women, Westminster gained a record intake of them. And the Tories lost, lost, lost (one final lol here). But this is where the next irony comes in, because the only way for the now-diminished Tories to form a government is for them to join a coalition with the Democratic Unionist Party in Northern Ireland. And a ruling coalition that includes the DUP is profoundly bad news for women. 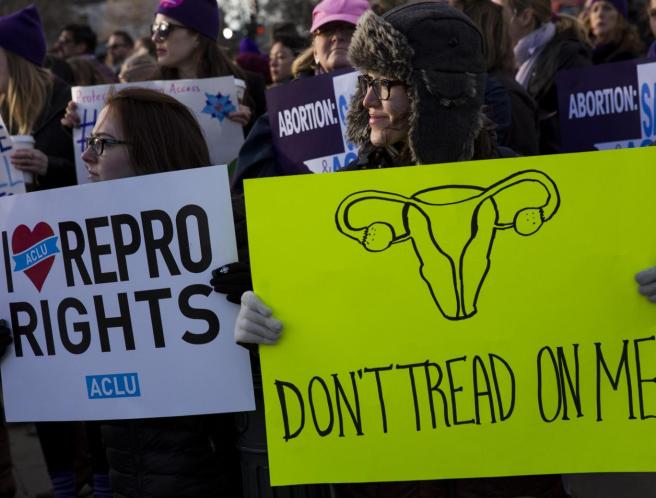 The heart of all moral and legal arguments about abortion is this: who owns a woman’s body? Is it the woman herself, or is it someone else? In the state of Arkansas, a new and brutal law has decided it’s the latter.

Arkansas Act 45, which was signed by the state’s governor Asa Hutchinson on Thursday, criminalises dilation and extraction, which is the surgical method used to perform most second trimester abortions. On its own, effectively banning abortion after 14 weeks would amount to a heinous attack on women, but Act 45 goes further.

It includes a provision for the pregnant woman’s husband, parent or guardian, or healthcare provider to block abortions by D&E – and there’s no exemption for cases of rape and incest. That means that a woman raped by her husband, or a girl raped by her father, has to go through her abuser to end any resulting pregnancy. And that means that Arkansas is siding with male coercion over women’s bodies. It means that women’s consent can be stolen from them twice: first in the act of rape, and again in the denial of abortion.

This is one of five pieces by different writers commissioned by the Observer to cover the big issues of 2016: you can also read Carole Cadwalladr on tech disruption, Ryan Avent on how technology puts millions of jobs in jeopardy, Ian Buruma on the rise of autocrats, and (in print only at the moment) Michael Sandel on what progressive parties need to reckon with to retain relevance.

In 2016, body politics went definitively mainstream. Transgender people, having previously been objects of niche curiosity and prurience at best from most of the media, became the subject of mid-morning current affairs debates, in-depth documentaries and sympathetic profiles. What does it mean to be trans? How should society change to give trans people necessary rights and protections?

These questions received urgent discussion, while other issues were more implied than addressed: how much is anyone able to control their own body, both in terms of what they choose to do with it and how it is perceived by other people? That problem of rights and responsibilities, and the tension between the individual and society, simmered away not only in the context of gender but also when it came to many other matters of sex and sexuality.

Read the full column at the Observer

Later today the campaign group Don’t Screen Us Out will deliver a petition to Health Secretary Jeremy Hunt asking that he oppose the introduction NIPT – of a safe, accurate test for trisomy disorders. Their stated reason is a fear that improved detection rate for Down’s syndrome will lead to an increased abortion rate for affected pregnancies, and perhaps the elimination of Down’s syndrome altogether. This is a strange argument since it’s largely coming from families who have either chosen not to screen or chosen to have children with Down’s, and are themselves proof against their own claims.

Not at all strangely, the issue has been hijacked by anti-choice campaigners: Don’t Screen Us Out spokesperson Lynn Murray is also a longstanding member of the anti-abortion group SPUC. Following my response to Sally Phillips’ documentary A World Without Down’s Syndrome?, Sky News invited me to debate the issue with James Mildred, described as a “bioethics commentator” here but more accurately an anti-abortion activist since he’s a spokesman for the religious anti-choice group CARE. During the interview, he conceded that he was entirely opposed to termination and motivated in this by Christian beliefs.

For people like Mildred, the fact that the current testing regiment caused miscarriage in 1% of cases is irrelevant. The fact that NIPT is 99% accurate and will help families prepare for wanted babies with Down’s as well as end unwanted pregnancies does not interest them. NIPT itself is clearly better both for women and for the unborn they claim to be concerned about; the only reason to stop it is if you want is to stop women having information, because you don’t like the choices they make. Ultimately, opponents of NIPT don’t want to talk about the reality of bringing up a child with serious mental and physical disabilities, nor what happens when that child becomes an adult and still needs care. Mildred’s position isn’t just anti-woman, it’s anti-disability too.

Read more about NIPT from the NHS

At one point in her documentary, A World Without Down’s Syndrome?, Sally Phillips finds herself earnestly agreeing that the most important thing about a woman’s decision to abort or continue with any pregnancy is that it’s exactly that – her decision.

But a decision can only be as good as the information you base it on, which makes this a strange moment when the film itself is essentially a plea to deny women access to a safe and accurate test for Down’s syndrome. It’s your choice, was the message, but you shouldn’t know too much about what you’re actually choosing. 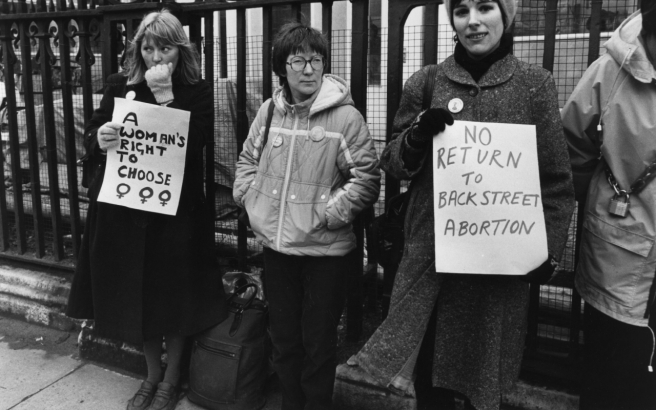 Getting an abortion in the UK is an exercise in hoop-jumping. You have to find a doctor willing to refer you (jump), convince them your case satisfies the conditions of the 1967 Abortion Act (jump), have a second doctor confirm this (jump), and get yourself to a clinic (jump). Given that the 1967 Abortion Act doesn’t apply in Northern Ireland, and provision varies by region depending on doctors’ expertise, jumping all these hoops will involve travelling hundreds of miles and spending hundreds of pounds for many women every year.

That, however, is still considered too much of an easy ride by the politicians and campaigners who’d like to close down women’s right to choose. With no prospect of achieving an end to legal abortion, anti-abortion activists have focused their efforts instead on tightening those hoops and adding a few more, in the hope that some women will get stuck on their way through. So far, they haven’t had any legislative success, but that hasn’t stopped them from trying.

I contributed an article on devolution and abortion law to the Spring issue of Fabiana, the magazine of the Fabian Women’s Network:

The Scotland Bill is due to receive royal assent before the Holyrood elections in May. It will devolve many new powers to the Scottish parliament, including abortion law – making it, in a quiet way, one of the biggest shifts in abortion law in the UK since the 1967 Abortion Act. Quiet, because discussion of the issues have been somewhat limited for such a major change, although a few pro-choice voices have sounded concern, and a few anti-abortion campaigners have given validation to those alarms.

In Britain, women’s options are constrained and conditional, but there are at least options. In Ireland, there are none.