Remember all that blogging about Free I was doing earlier this year? My review of Chris Anderson’s guide to something-for-nothing is in Tribune this week (26 September-1 October 2009) or you can read it in full below: END_OF_DOCUMENT_TOKEN_TO_BE_REPLACED

Because it’s topical, what with her making laureate and all – and in no way because I’ve been too slammed with proper work to write a proper post – here’s a review of Rapture by Carol Anne Duffy from the Paperhouse archives, first published in 2006. (See? Topical.) 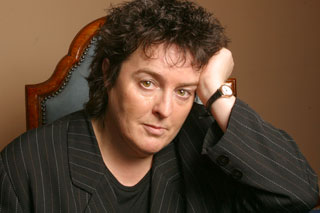 The eponymous rapture of Carol Anne Duffy’s new, T.S. Eliot Award-winning sequence of poems is the extreme pleasure of love; it is also a reference to the strange process of attempting to revive that love through writing after the agonies of loss. This is the sound of love being lifted bodily out of its grave. In Rapture, the love poem is always shadowed by grief – “loves’s spinster twin”.

The tone throughout the 52 poems is strikingly, sometimes painfully, personal – given that Duffy has previously shown a strong allegiance to the dramatic monologue, it is a surprise to encounter her in the naked “I”. From a writer who has often cultivated a poetic voice of no gender (that is to say, for whom gender has always seemed more a property of the characters she writes than of the poet writing), these poems also seem to offer a subtle putting-on of sex.

The hints are slight (“thorns on my breasts” in Forest, a panegyric to her lover, or “the dark fruit of your nipple / ripe on your breast” in Venus) but nonetheless clear that these lyrics are addressed from a woman, to a woman. Rapture is Duffy’s most intimate avowal of same-sex desire. The confessional quality is strong, and lyric loveliness often proves less affecting than scenes of personal embarrassment.

The description in Quickdraw of anxiously awaiting the lover’s phone call with the handset hipslung like a cowboy’s pistol ends with the speaker on her knees, fumbling for the phone. The indignity of desire appears poignantly in moments like this, and makes keen claim on the reader’s own painful experience.

It is this ability to move through the personal to suggest a general experience beyond the page that makes sense of the blurb’s claim that, “nowhere has Duffy more eloquently articulated her belief that poetry should speak for us all,” despite the intensely personal experience that seems to be documented by the sequence. Rapture is bonded not just thematically, but also narratively. It tells a story; there is a chronology, mangled as it may be by pain and memory.

But as the sequence comes to its conclusion, and the relationship it describes also reaches its end, Duffy turns increasingly to thoughts of words. “Love’s language starts, stops, starts; / the right words flowing or clotting in the heart,” she writes in Syntax – but if love’s language is erratic, at least the poet has the consolation of knowing that her language is under control, and in couplets. 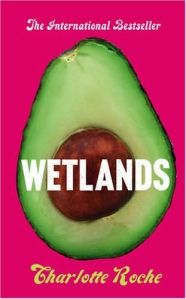 You ought to feel good about your body. Everyone wants you to, from the women’s glossies who promise you an arbitrary number of amazing tips to boost your self-esteem, to the cosmetics companies who have braved the raw frontiers of science to find new ways of hydrating and smoothing you so you’ll disgust yourself a bit less. Helen, the heroine of Charlotte Roche’s body, feels just fine about her body. Her first-person narrative is freakishly appealing (and pretty repulsive) because of the pleasure she takes in every protrusion and emission of her body: the earwax, the discharge, the infected hairshafts. The novel relies on the same mismatch between the ideal and the reality of the female body as Swift’s ‘The Lady’s Dressing Room’, only instead of being passively spied on in the act of shitting, this Celia is smashing her chamber pot in the street and daring you to complain.

Prematurely festooned with hemorrhoids at 18, she views her “cauliflower” as a test for the many, many men she fucks – “they have to really like me to get their nose in there,” she brags. It’s a test for the reader too, but in the end the rewards of the novel aren’t really enough to make up for the physical nastiness in which your face is rubbed. Set entirely in the proctology ward of a hospital where Helen is recovering from an operation on an infected anal fissure, caused in part by her idiosyncratic approach to hygiene and cleanliness (she seems to view herself as a one-woman germ-theory terror unit, dispersing blood and slime with a hideous zeal), this foray into the existential adolescent has some obvious antecedents. Helen is a perpetually wet Holden Caulfield and Wetlands is The Bell Jar with knobs (and vegetable matter, and ad-hoc tampons, and hospital furniture) in every orifice.

There’s a story of a fractured family peering from between the shock sections, but as Helen is the only character with any breath in her, it matters very little. And while the story diverts from its heroine’s aims for an attempt at an emotionally satisfying resolution, it essentially trades off one form of wish-fulfillment through self-mutilation for another. Wetlands has the same alarming streak as those fictions which star an anorexic as a self-sacrificing beacon of frail beauty: just because Helen has a smart mouth and eats her own pus doesn’t make her any less of a poster girl for self-harm. 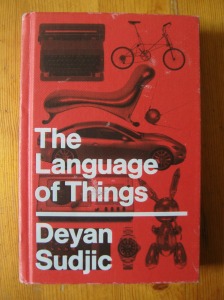 Earlier this week, I wrote about Karen magazine and Karen’s question, “Why do people buy unnecessary things?” Deyan Sudjic’s book, The Language Of Things, has a pretty good answer:

It is a curious paradox that even the most materialist of us tend to value what might be called the useless above the useful. Useless not in the sense of being without purpose, but without utility, or not much of it. […] Usefulness is inversely proportional to status. The more useless an object is, the more highly valued it will be. High-status utility is confined to such baroque elaborations of conspicuously redundant utility capacity as the wristwatch supposedly designed for use by divers […] or the grossly overspecified SUV.

This description is shamingly acute. My favourite handbag is a wee pretty one that only holds a key and a lipstick, and has to be constantly clutched by the tiny handle. My best watch doesn’t have any numbers on its miniature face. I have a terrible addiction to copies of McSweeney’s which spread out in unwieldy directions, spill mini-mags everywhere, and are actually pretty hard to read. Luckily, Sudjic is just as susceptible to the wiles of objects, and tells a reassuring story of his seduction by a MacBook near the start of The Language Of Things. Playfulness and ingenuity in objects aren’t universally bad – my handbag, my watch and my McSweeney’s are all witty and lovely things. But it’s curious that I’m not equally impressed by sturdy and capacious bags, watches with digits or the basic marvel of the paperback.

Design – the polish that convinces you to buy one thing rather than another, the copyright-protected detail that identifies a desirable brand – is critical to consumer culture. But good design – the “brilliant synthesis of structure and mechanism” which Sudjic identifies in the anglepoise lamp and the French wine bottle – is less so. A well-designed product will last, will replace similar products, and exempt the purchaser from being a consumer for the life of the object.

And it’s the useless that gets treasured. The examples of design which make it into the Museum Of Modern Art in New York are divorced from the context of their function: “whether consciously or not”, says Sudjic, “[MOMA] is doing its best to suggest that design is just as useless as art, and therefore almost as valuable.” In the end, Sudjic argues that the artistic aspirations of designers is changing the ideology of design, and will “fuel what may be a short lived explosion of flamboyant new work.” It’s clear that he doesn’t think this will be especially good for design or for consumers. 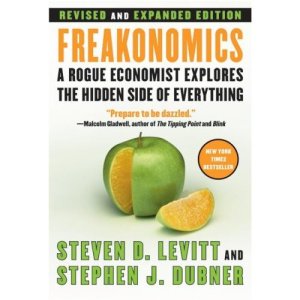 There’s loads of surprising stuff contained in Freakonomics, Steven D Levitt and Stephen J Dubner’s romp through the application of economic principles to sociological data.  The thesis that legalised abortion leads directly to lowered crime rates – that’s pretty shocking, even if you’re someone (like me) who thinks that abortion should be legal and that one of the strongest arguments for its legality is the unhappy circumstance of unwanted children. Or the analysis of cheating by sumo, which cleverly presses the data from sumo wrestlers’ championship bouts to discover the circumstances under which a wrestler seems to be willing to hand the win to his opponent. The data are structured to account for variables, interrogated for controls, analysed – and the outcomes are often revelatory, not so much for the conclusions, but for the implicit argument that something as seemingly ineffable as human behaviour can be measured in this way.

There’s an argument, pushed by Meghan Falvey for n+1 magazine, that the book is too tightly focussed on a cost-benefit analysis and incapable of accommodating outcomes which fall outside of the financial, but I don’t think that’s a fair representation of Levitt and Dubner’s work. As a commentary on their method, it’s roughly acceptable: analysis requires that an approximate value can be set on the input and output of a transaction, and some things (money, lifespan, crime per capita) are easier to quantify than others (happiness, love, the dappling of sunshine on treetops). But Falvey’s ethical objection – that Freakonomics espouses a narrow view of human behaviour as reward-driven and rational, and so falls into the service of stakeholder-society welfare restriction – seems simply wrong.