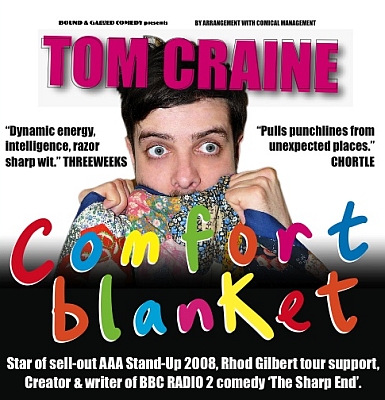 Sweetly anxious nonsense sets up dark flashes of brilliance in Tom Caine’s giddily self-conscious show. Loosely wrapped around the theme of worries and consolations, Caine’s crowd-embracing question “Does anyone else here do that?” tends to get a response of surprised agreement – he skips past the normal pound-shop observations and into a raw and funny world of exaggerated confessional. “It’s all true,” he promises, then adds: “Well, except for that bit.”

With a nervy, head-scratching, hand-twisting stage presence, Caine comes off as a likeably unthreatening neurotic – which means there’s even more comic force when a black punchline, such as becoming an accidental sex-offender through predictive text, punctures the act.

Peter Stringfellow, who knows literally nothing about being funny or sexy, told poor old Kirsten O’Brien that “Funny girls aren’t sexy” when she went to him for advice about whether she should, um, be funny or sexy. Now, normally (and unlike Kirsten) I don’t include Stringfellow on my list of people to query when looking for insights into the male psyche, but in this case he’s probably speaking for more idiots than just himself: when Esquire decided to run a “Women of Flight Of The Conchords” piece they brilliantly invited some cameo-girlfriends, but not Kristen Schaal, the “only pair of recurring tits” on the show. She’s the funny one, which gets her struck off the men’s mag beauty-shoot roster. 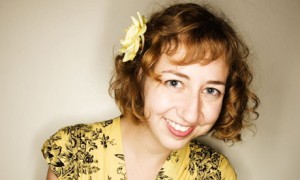 Even if I’m generous to Esquire and say that lovely Schaal just didn’t have the look they wanted, they still excluded her from being a woman of the show in which she’s a lead actor for being either the wrong sort of pretty, or the wrong sort of funny. Ouch. And – if you’ll follow me into my darkened den of close reading – even the way we talk about humour is gendered. If something makes you laugh hard, you’re hysterical, figuratively be-wombed and penetrated by the wit that’s working on you.

Given that sort of bullshit, it doesn’t seem especially controversial to say – as Jo Brand did – that women don’t get a fair crack at TV comedy. They don’t. The common guiding principle that funny and pretty are mutually exclusive, while TV exposure is dependent on pretty, puts a fairly substantial bar on funny women making it through. So it’s not necessary to go in for some weak-brained evolutionary psychology about how women are ‘differently funny’ because men are like aggressive hunters and shit while women are all nice and collaborative and conversational (taken down here). That goes for Kathy Lette on the Media Show as much as it does for contrarian little TV-reviewing pricks.

I think secretly men think women aren’t funny, and I presume it’s because they’re frightened of what it is we’re being funny about. I think they think we spend the entire time talking about the length of their member, which is not true – because we also talk about the width which after childbirth is much, much more important. But we women are starting to be annoyed by the fact that we aren’t ever invited onto these panel shows, and if we are, we’re over-run by the men in this testosterone fueled environment. We need our own quiz show. […] I do think there’s a difference between male and female humour. I think men tend to have black belts in kung-fu and they can fire off one-liners and gags. Women’s humour is much more confessional.

Lette’s brave new world of gender equality is women cracking gags about the laxness of their pelvic floor. You know, if Lette really wanted to speak up for witty ladies, she could stop pulling her idea of funny out of her vagina.

That’s a horribly laboured reference in my post title. Not like the elegant allusion with which The Word has headlined my Graham Linehan interview in their July issue: 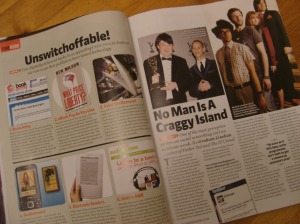 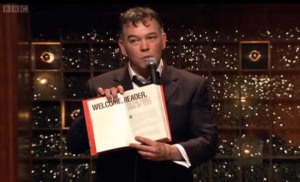 In a world of stratified markets, every special interest gets its own TV channel. If you’re hot for cars and stuff that explodes, you can watch Dave. If you like racy exploitation docs, there’s Channel 4. If you can simply never see too many expensively formulaic dramas about sexcrimes, Hallmark is your friend with a rolling schedule of Law And Order: SVU. So I’m expecting that very soon one of the networks will announce the launch of a channel to service my very own special interest: middle-aged men looking uncomfortable in suits while getting eloquently profane about how shit modern life is.

It could be called “Charlie” after the current king of being funny and a bit sneery. The idents could feature the channel’s stars looking really annoyed. You could even build the marketing campaign around pathetic puns on the channel’s name (“Coming up: Mark Kermode on Charlie!” – oh, how the laughter will ring out). Anyway, until someone picks up my obviously amazing idea, I’m going to be watching the very brilliant and funny Stewart Lee Comedy Vehicle on BBC2, Mondays, 10pm.

Last night, Stewart took on publishing in a routine that kicked at bloated blockbusters, misery memoirs, celebrity clag, the self-destructive discount economics of publishing and the depressing influence of supermarkets on bookselling (“Get yer books! Pile up the books! Get a multipack of books! Why not take an extra book home, put it in the freezer!”). “Did Willian Tyndale burn at the stake in 1536 in the cause of vernacular English literature so that you could read The Gospel According To Chris Moyles? No he didn’t,” says Lee. And he’s got a mardy, elitist, excellent point. Books can be radical and world-shaking, not just something you chuck in the trolley with the other consumables: