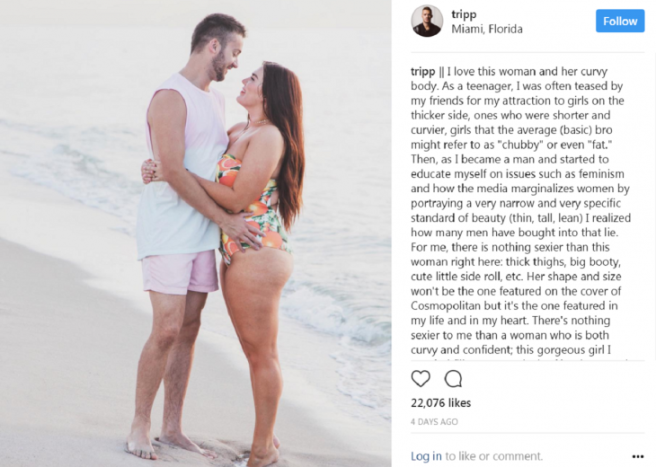 Can’t say I’ve ever bought into the idea of penis envy, but man, being a man looks like a goddamn breeze sometimes, and if that’s what having a nob gets you, then heck maybe I am a bit jealous.

Take, for example, looking after your own kids. When a woman does it, no one cares. In fact, she’s just doing what she’s meant to. In actual fact, it’s nice of everyone to let her do it and to be honest isn’t she slightly taking the piss by having time off work, and she’d better not embarrass everyone by showing a bit of nipple. But let a dad so much as pick up a bottle, and watch the world swoon while angel choirs descend to sing oh isn’t he great and isn’t mum lucky that he babysits. Pass the wetwipes, I seem to have been sick.

Low expectations. That’s what I’m talking about. That’s the great bonus of masculinity. But even I was taken aback to see a man getting praised for, um, fancying his wife. Robbie Tripp describes himself as a “wordsmith, public speaker, and creative activist” and the author of “an abstract manifesto for disruptive creativity”, which to be honest sound like the kind of things you’d make up to get worried relatives off your back. (“No grandma, I’m not unemployed, I’m a creative activist.”) He can now add to that CV the impressive achievement of being keen on the woman he married.