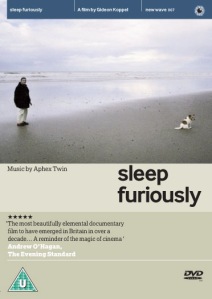 That arrestingly contradictory title? It’s taken from a linguist’s game, devised by Noam Chomsky as an example of a grammatically correct but meaningless phrase: “colourless green ideas sleep furiously”.

This quiet, rhythmic, carefully-observed documentary of rural life in Wales seems absurdly far from such academic exercises – the hill-farming community of Trefurig it observes is embedded in everyday realism. Villagers debate the closure of the under-subscribed local school. Cakes are baked. Sheepdogs compete in trials. Calves are delivered in a slither of blood and mucous.

But this is an imperilled community, desperately close to becoming as non-existent as Chomsky’s colourless green ideas. The residents are mostly elderly, and the services which bind the community are astonishingly fragile: even the sign posts are falling apart. That accounts for the sleepiness.

The fury comes out in moments of small desperation, such as the frantic snuffling of newborn piglets, or the dust and ghosts of an abandoned farm. Time-lapse photography and the lack of a storytelling narration are reminiscent of the Koyaanisquatsi films, and the Aphex Twin soundtrack has a similar elusive expressiveness to Philip Glass’ work – but this is a film that gets close enough to its subjects to show their faces. Remarkable, beautiful film-making.

Kirsten’s Topless Ambition sounds like the sort of programme BBC3 doesn’t want to be associated with anymore: a prurient exploito-doc about a children’s TV presenter agonising over whether to take the career changing decision to do a sexy lads’ mag shoot, whose research involves shaking her tits around a lot and  meeting women with really nice tits who shake them around for a living.

This is your standard mission documentary, alright. Starting out with a leering to-camera piece in which Kirsten demands if we want to “see these puppies in print”, it’s immediately awkward. When it lurches into scene of Kirsten looking at photos of Mark Speight (her late co-host on SMart) and explaining that his death convinced her that she needed to move into mainstream TV, it’s suddenly horrible: she’s obviously genuinely grieved by the death of a colleague and friend, but presenting it as a motivating factor in a quest to strip off feels opportunistic.

Other stuff feels not-quite-right too. For one thing, Kirsten’s got a secondary career on the go already – she does stand-up comedy. For another, she raises lots of questions about whether kids’ TV presenters set a bad example by doing glamour shoots, and doesn’t answer any of them before heading out to try on bikinis and learn poledancing. And critically, she doesn’t project sexiness. She goofs off charmingly when trying out page 3 poses, and she puts on a game show in the Carry On-environs of a branch of Hooters, but she doesn’t have a steamy lads mag cover look – she just isn’t that committed to going all Gail Porter and showing off and showing off a “scrawny Kentucky Fried Chicken bargain bucket breasts airbrushed bum newly-hatched raptor-foetus body“.

So it’s a stacked documentatary moving to a preconceived conclusion every bit as much as if Kirsten had been intending to flash her nipples all along, and like any mission documentary, the narrative tramples moronically all over the factual content. Do young girls really see Jordan as the pinnacle of success? Can CBBC presenters influence the aspirations of their audience? Does the transition from kids to adult telly really depend on clinching that bikini shoot? Are women in the media coerced into objectifying themselves? I don’t know, because everytime Kirsten starts googling something she’s concerned about she gets herded along to another instructive encounter like a confused sheep trailing through the gates on the way to the abatoir.

It’s the fictional structure that makes the truthful moments so hard to grasp. When the climactic trip to the FHM offices comes around, Kirsten sits in an office with the editor and has him tell her that she’s got an “adequate” face and an “adequate” body and wouldn’t cut it as an FHM girl. He’s right. The audience never expected him to say anything anything else. I’m pretty sure that Kirsten knows she’s not FHM material and never expected or intended to go into the shoot (if a shoot was what she wanted, dirty little Front magazine had already made her an offer).

But it’s still massively bruising to be told you’re not hot enough and Kirsten cries, miserably, for ages before deciding to stick to the stand-up. Which is what she was going to do anyway. You know what? I didn’t want to see Kirsten’s boobs that much but all of a sudden I feel like I’ve been played. That wasn’t a documentary, it was Kirsten O’Brien’s career relaunching on a sea of self-deprecation. Godspeed, little Kirsten. Godspeed.

Best bit about having a real job (apart from the awesome colleagues, the constant fondling of beautiful clothes made from beautiful yarn, and getting to say things like “How do we feel about Oxford commas?” and “More Helvetica!”): taking my first ever proper day off. I’m not meant to be studying. I’m not meant to be writing freelance. The kids are at school or with the childminder. I’m just having a day off – which means, wearing my pyjamas til the afternoon, eating chilli noodles for lunch, doing some non-work knitting, and watching movies…