Sometimes, when there’s a big event due on a specified date, journalists will write pieces as though the thing has happened before it actually has. Hillary Clinton looked, up till election day, in a strong position to win the presidency; and if I’m honest, the thought of the alternative was more awful than many writers and commissioning editors were perhaps willing to countenance. Why live in a bad potential future when you could pretend the better one is guaranteed instead? So Stylist gave me a commission: write an open letter to Hillary Clinton as the first female US president, and if the worst happens, we’ll commission you to do an alternative column on the day.

The alternative was this, which was one of the three pieces I turned out between 5am and 9am on Wednesday. But this is the one I wrote first. This is the one I wanted to be true. Funnily enough, on Tuesday evening I watched an episode of the sitcom Community called Remedial Chaos, in which a character rolls a dice to make a decision, thereby splitting off the universe into six timelines. On Wednesday, I woke up in the darkest timeline. But when I was writing this, and the other Hillary-victory pre-commission I did, I got to hurl myself forward to the good place, briefly. There’s an entire literature of this, by the way: celebratory pieces by feminist journalists never published because the cause for celebration died in the bitter grip of the polls. One day, someone should compile them into a book. It will be the saddest book.

I could just sit here and type that beautiful phrase all day: “Dear Madam President”.

Even as someone in a country with its second female head of government (only another 72 consecutive female prime ministers to go before the UK hits equality!), the first woman in the White House feels like a big deal. Because this is America, and America is the biggest deal of all.

The only superpower standing. A country that promises ‘liberty and justice for all’, but that for more than three centuries only put white men in the top job. When that country appoints its first woman president, and when she succeeds its first black president, you know that history has happened.

It’s taken decades, but the struggles for civil rights and women’s liberation that kicked off in the 20th century have finally taken the big prize.

I’m going to enjoy every moment of this victory. 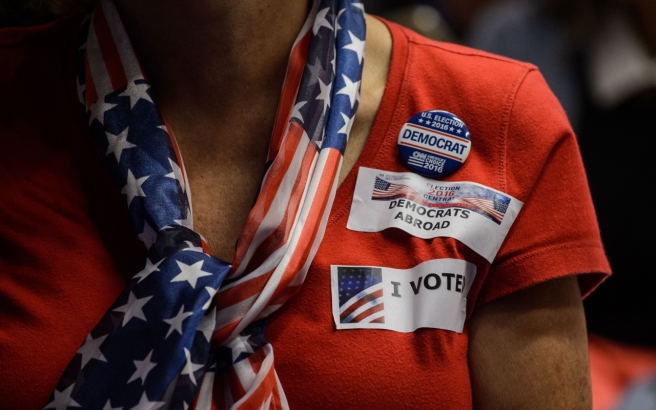 A while ago, a friend set me a problem. “Why,” he asked, “is feminism structurally weak?” Feminism should, after all, be a dazzling powerful political movement. Women marginally outnumber men. The evidence that we are the subjugated class is everywhere, from the wage gap to sex ratio in senior jobs to our woeful absence from political positions to the grim inequality of the housework split to the daily drip-drip-drip of advertising telling us exactly how wrong our bodies are.

Those things should fit together into a simple plan: get the biggest gang together and force the other side to turn over what’s ours by right. But this has never happened, and today it has failed to happen on a tragic, global scale. Donald Trump has beaten Hillary Clinton because he was a man running against a woman. There are many ways to dress up his victory, but only one that explains it. This was a referendum on sex roles, and America voted racist penis. 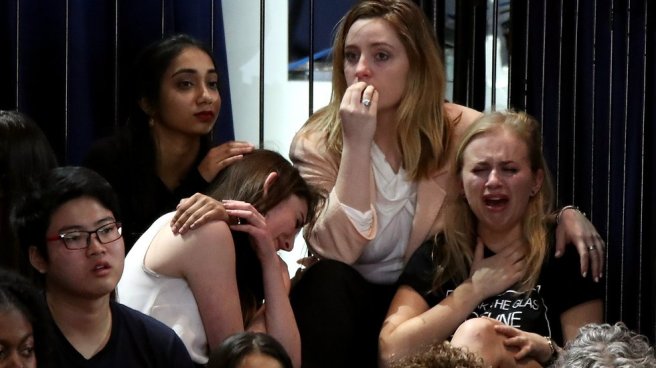 You are ten. When Hillary Clinton accepted the Democratic nomination and said “one of you is next”, she was speaking to you.

Not, of course, that you were literally on your way to becoming President of the USA – but her victory spoke of possibility for girls and women everywhere. When the ruling party of the biggest democracy in the world selects a female candidate as its presidential candidate, it matters. When that candidate is the woman who said “women’s rights are human rights”, it really matters.

Between late July and last night, we lived in a swallow-flight moment of hope. It was beautiful as it darted through the sky, and it is gone. Back in the summer, you teased me about this election: “Mummy, Hillary Clinton’s not going to win, is she? Because no one you like ever wins, do they?” And you made me laugh, which felt like a rare thing in that grim summer after Jo Cox was murdered and the UK voted to leave the EU.

But you were right, too. I felt it then, and I know it now: the things that I think make sense about the world, the faith in a bedrock of fairness and generosity that I have built into my calculations so far, do not seem to be there.

Maybe one day, when this brutal presidential election is over, Hillary Clinton will look on Melania Trump with sympathy. The prospective Republican First Lady’s experience sometimes seems like an anxiety dream rerun of Clinton’s own time stumping for job of wife-in-chief back in 1992. Even before Bill Clinton had the Democratic nomination, rumours about his infidelities were being kicked up, and in a bid to outflank them, the Clintons appeared in a joint interview on the CBS current affairs show 60 Minutes. “I’m not sitting here some little woman standing by my man like Tammy Wynette,” she said, the extreme humiliation of her situation registering as perhaps the tiniest flicker of her perfectly composed face. “I’m sitting here because I love him and I respect him.”

Another decade, another TV set, another consort to a nominee called on to defend her husband’s honour. After the release of Donald Trump’s grotesque “grab her by the pussy” comments from 2005, Melania has headed out to do her wifely duty. But where the Clintons in 1992 had the benefit of uncertainty – the allegations against Bill were unproven – Melania is going up against the implacable fact of recorded evidence, and going up alone. Even leaving aside the boasts about sexual assault, which she’s at pains to discount, this still leaves her talking about a tape of her husband declaring that he “tried to fuck” another woman when he was only newly married.

5 Live’s Afternoon Edition invited me on to discuss whether Hillary Clinton winning the democratic nomination really does represent the shattering of the class ceiling, with Mara Rudman (former national security official for the Obama and Clinton administrations). It was a really enjoyable piece to do – because this does feel like a genuinely celebratory moment, and because Rudman’s measured career politico style couldn’t cover up her own joy in it. There’s a really interesting semi-disagreement/finessing of the point about rights, privilege and honouring the work of the women before us towards the end of the segment that I’ve been thinking on since we recorded it, too. 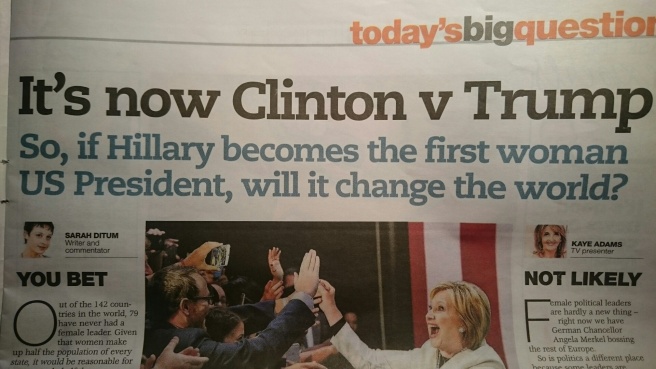 Out of 142 countries in the world, 79 have never had a female leader. Given that women make up half the population of every state, it would be reasonable for women to do half the governing, but we are nowhere near. So even if the only difference between Hillary and the male alternative is that she’s Madam rather than Mr President, that’s important.

Read a PDF version of this column