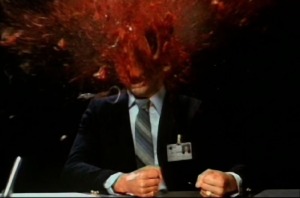 Fiction about technology mostly means wide-eyed reflections on things that happened five minutes ago and the way that whatever it is will absolutely change everything utterly forever. The stylish kitsch of the Matrix movies and the noxious ‘look at my sexy new laptop’ toss of the absurd Jeanette Winterson are equally pointless if you’re interested in anything apart from the capacity of the simple to be perpetually surprised (alright, and some amazing running and fighting, which Winterson obviously can’t offer because she is far too busy writing important and novel-ish things).

David Cronenberg (whose Scanners I watched again this weekend, and whose films have owned me ever since a late-night showing of Videodrome made a trembling wreck of me) never embarrasses himself like this because he always treats technology as something that’s entirely human and as morally neutral as muscle. The recordings and broadcasts of Videodrome are terrifying, but the technology itself isn’t malevolent – it’s the information it conveys, and the willingness of the consumer to absorb it, that produces the horror. Medicine and machinery are fleshy things in the Cronenberg world, always a part of what we are rather than a chilly external force. In Scanners, when a psychic hacks into a computer network using the phone wire and his brain, it doesn’t feel like a hokey pre-internet moment: it’s just the summation of the idea that telecommunications are a society’s nervous system.

A lot of Cronenberg’s success is down to his crisp materialism. When the doctor character guides a newly-discovered scanner through his first deliberate psychic attack, he explains that this is not mind reading, “it’s nervous system to nervous system.” If you don’t romanticise humans, you can’t exaggerate the momentousness of a change in them. The conflict in the story is between two groups who are morally identical: a private security firm which wants to exploit the scanners as weapons, and a biochemistry lab which fronts for a terrorist scanner underground. These aren’t goodies or baddies, they’re just offering different kinds of exploitation and exactly enough tension to play through the ideas and facilitate a massive, brainblasting showdown.